Am I the only one that keeps multiple spaghetti squash in the fridge and never know how to prepare them? I either top the squash with some sort of meat sauce or I sauté it in browned butter and sage with Parmesan cheese. Both are really great options, but it’s time to try out something new. I knew I wanted a sauce that was light, not made with heavy whipping cream. I checked the pantry and I noticed that I had some unsweetened almond milk on hand. This was going to be the base of my sauce.

I haven’t gotten the chance to experiment with spaghetti squash much, but I think it’s time. I loved how this recipe came out and it is now going to be a keeper. The sun-dried tomatoes in this recipe brought out the flavor in this plate. Now if only I could get my kids to eat spaghetti squash. They aren’t usually picky but they will never give up their pasta for a vegetable. Believe me, I have swapped their pasta out with veggie based options but I have yet to fool them!

This spaghetti squash with spinach and sun-dried tomatoes is an easy recipe that is really light, filling and packed with flavor. 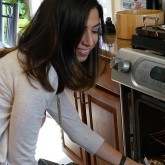