When your two little everything’s beg you over and over at every supermarket visit to get them a coconut, sooner or later you are going to give in at the produce isle of the Whole Foods Market. I have never purchased a coconut in the past, nor have I had any idea on how to cut and clean one out. These two little monkeys assured me that they knew how and have done all their research watching how-to videos on Youtube. So, for $2.99 and no plans on a Saturday night, I thought what the heck, it’s finally your lucky day. Typically, we tend to be experimental on produce, just wait and see what they want me to get for them next time.

After a few minutes of poking a hole inside this giant white fuzzball, we filled two glasses with coconut water. I’ve never been a fan of it, but my kids pretended to be so I wouldn’t feel bad.

Once we got this thing open, the excitement in their eyes to try the white flesh was priceless. The blisters I got on my fingers, however, were not. It took me about two hours to clean the coconut out of it’s shell, but I wanted to keep the halves in tact to recycle them for another use. The rest of their weekend was full of coconut everything, their favorite being mixing it together with chocolate.

I know it’s just a coconut, but something as little as this gets my boys excited to be in the kitchen with me. It makes them want to be involved in cooking while expanding their palette. 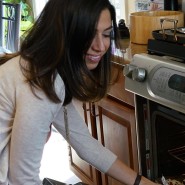 What can I say... I'm a wife, a mom of 2 and a crazy pup, full time web designer, yoga instructor, fitness enthusiast, recipe creator, foodie and now part time blogger. Good thing I have so much time on my hands to do it all....not!!